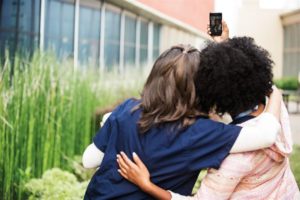 Learning to live with an ostomy bag can seem daunting at first. However, many famous and inspiring people know what you’re going through.

What is an Ostomy?

Ostomy surgery involves removing part of your colon (colostomy), ileum–small intestine (ileostomy), or bladder (urostomy). Urine or stool moves out of the body through an opening in the abdomen called a stoma. An ostomy bag is attached to the stoma to catch and collect the stool or urine so that it can be thrown away safely.

An ostomy can be temporary or permanent, depending on the reason for the surgery. Some common reasons for ostomy surgery include:

From time to time, you may have a problem with your stoma such as:

You and your healthcare provider can handle these issues if and when they appear.

Throughout history, there have been many famous people with stomas who continued to make significant contributions.

Dwight David Eisenhower, the 34th president of the United States, had a colostomy to treat a small bowel obstruction in 1956 while acting as president.

Tip O’Neill (Thomas P. O’Neill Junior) was an American politician and speaker of the U.S. House of Representatives between 1977 and 1987. He developed colon cancer after he retired. He had ostomy surgery and went on to promote colon cancer awareness.

Nancy Lamott, an American singer, had an ileostomy in 1993 due to Crohn’s disease. She continued singing and performing.

Blake Beckford, a British bodybuilder and model, had an ileostomy due to ulcerative colitis. He continues working and posing to raise awareness of inflammatory bowel diseases.

Rolf Benirschke is a former NFL player with the San Diego Chargers. His ulcerative colitis resulted in two ostomies. He became the first professional athlete to have an ostomy while playing.

Jerry Kramer is a former NFL player with the Green Bay Packers. He had several intestinal surgeries, including a colostomy, and is an advocate for colon cancer screening.

Babe Zaharias was an Olympic track and field athlete, basketball player, and PGA golf player. She was diagnosed with colon cancer in 1953, had a colostomy, and continued playing after recovering.

Zoey Wright, a world champion bodybuilder and fitness model from Cornwall in the United Kingdom, had an ileostomy after struggling for years with ulcerative colitis. She did not let her condition stop her from modeling and competing.

Brittani Nicholl, a pro-surfer from Australia, was diagnosed with Crohn’s disease at age seven and had an ileostomy at age 16. She was able to continue surfing at the professional level.

If you have an ostomy, you are not alone. People of all ages, genders, and even social statuses, as you can see from this list, face this challenge. If you are struggling with your ostomy, talk to your doctor today to better understand how to manage your condition.

Simply Medical has ostomy products that can help you better manage your condition.